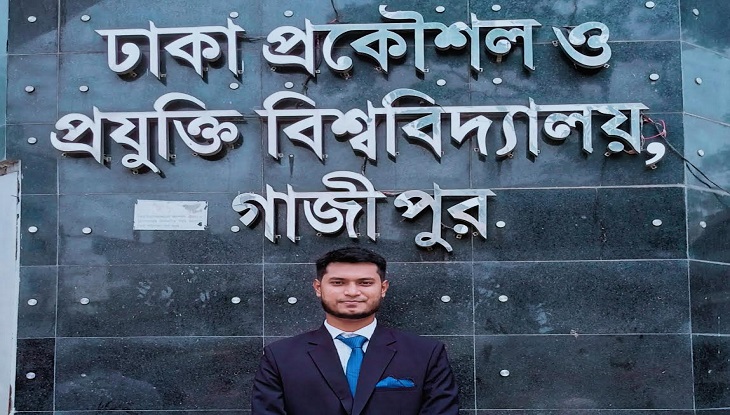 DUET's talented graduate engineer Sidrat Muntaha Nur Pranta. He has participated in more than half a hundred competitions at international, national and university level and has won dozens of medals, mementos and honors for Dhaka University of Engineering and Technology, Gazipur. Apart from extra-curricular and co-curricular activities, he has equally credited in institutional results.

In 2022, he secured 2nd place in EEE section of DUET with equivalent 91 percent marks and 3.89/4.00 CGPA and obtained B.Sc in Engineering degree with Hattrick Dean's Award. Last year at the Shaheed Mostafa Excellence Award, he was awarded Student of the Year in DUET for his all-round performance. In addition, in 2016, Bangladesh Sweden Polytechnic Institute, Kaptai obtained a diploma in engineering degree from the Department of Electrical Technology. Here he grabbed everyone's attention by showcasing an exceptional automation device at the Skill Development Expo 2015.

If we look at most of the students of different universities of the country, it is seen that those who do well in academic results have very little behavior in extra-curricular, co-curricular and other areas. However, in this case, the edge has created an exceptional and unique example in the education sector of this country.

He and his team won the NASA Galactic Problem Solver Award in 2021 for the SpaceEye software idea and implementation at the NASA SpaceAps Challenge 10 competition. In addition, he won the title of regional finalist in the International Hult Prize, which was certified by Hult International Business School and former American President Bill Clinton. Besides, recently in 2022, one of his thesis won the title of championship in an international thesis paper contest organized by the Institute of Electrical and Electronics Engineers, which brought glory to the duo and the country. His thesis topic here was a modern VCO design that would enable fast and cost-effective PLL parts of communication devices. Besides, he and his team won an inter-university robotics competition of Dhaka University. Also aired on a private TV channel. In GPH Ispat Aso Robot Banai' competition, he won the title in various stages. He also won Brain Share National English Olympiad. His various innovative ideas and activities have attracted national attention and have appeared on national television and newspapers at various times. Along with this, he has served as an ambassador and youth icon for various organizations at the national and international level, including the British Council Bangladesh Section and Techfest IIT, Bombay, India.

Currently, he is working as a lecturer in the EEE department of Sonargaon University, a reputed institution in the capital. Here also he is very dear and exemplary to the students. Besides, he is studying Postgraduate Course in DUET. He has twice served as a judge in the National Science and Technology Museum sponsored Robotics, Science and Innovation Competition and participated as a Youth Icon.

Apart from this, now he is constantly spending his time providing training in workshops and seminars on science, robotics, innovation and technology in various universities of the country. In addition, he won the title of winner in the Innovation for Smart City event of Bangladesh Smart City Expo 2019. Cyber ​​Security Malaysia CEO Dr. Amir Uddin Bin Abdul Wahab awarded him. In addition, one of his researches in the National Science, Technology, Engineering and Mathematics competition was placed in the top 30 of the country at the national level. He said that since childhood, he was interested in learning new things in a different way and applying them. Kaptai received the Secondary Scholar Merit Test scholarship for the science department and has since focused on hands-on and hands-on learning in addition to reading. He also said that the world outside of book learning is vast and the field of application is infinite, we should give equal importance to both. Aiming for the youth, he further said it is very important to be involved in co-curricular and extra-curricular activities along with academic studies. If you can manage your time properly, you can do both well at the same time.

Raised in Kaptai, Rangamati and born in Chakaria, Cox's Bazar, when asked about his future plans, he said, "I will try to do better for this country and nation with the knowledge and experience I have gained, given the right opportunity." Since I am in the teaching profession, I want to concentrate fully on producing more quality engineer graduates in the country.

A Prolific Writer Is Tanvir Mehedi